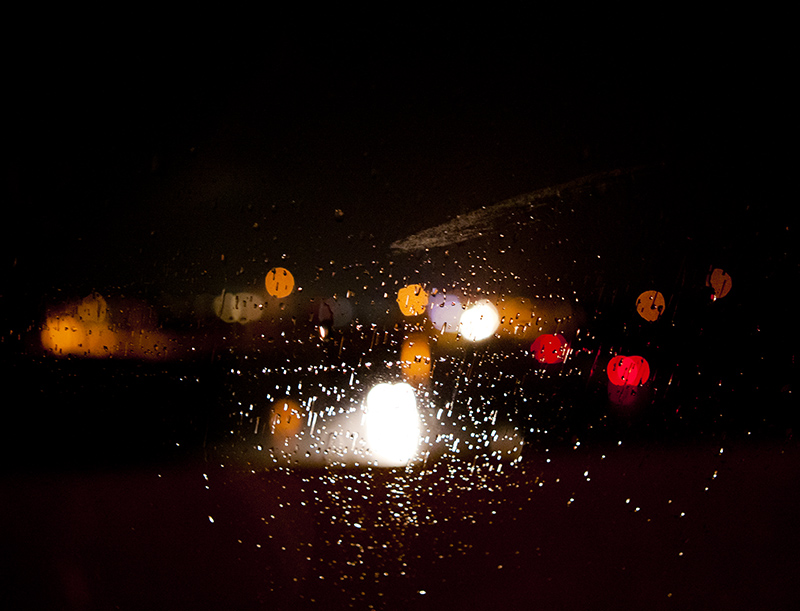 <figcaption class="wp-caption-text">Rain on the car window, on Beverly Road overlooking I-90 at 4am</figcaption></figure>

Localins will know that we’ve had quite a number of strong storm systems in the Chicago area of late. I love ‘em. Can’t get enough of them. Well, on Friday I ended up crashing in bed much earlier than usual, must have been a weighty day. I woke up at 3:00 am to the sounds of a storm starting to roll in.

Crashes of lightening and bellows of thunder that just make me giddy with excitement and awed at the display of power.

So I did what any photographer would do, jumped out of bed, grabbed my camera from my car and started walking towards Congdon Avenue in Elgin. I got about half way down the blog and decided I needed a trash bag to keep my (weather resistant) camera dryish. By the time I got towards the house, it was pouring like mad.

It was great. I was SOAKED.

I was hoping to get a lightning shot, but I just wasn’t able to get one and wasn’t really prepared. Tripods help a lot, as well as something to really keep the camera dry and the lens clear. After some attempts from my car on Beverly Road over I-90, the storm started to pass. This was what I came away with from the adventure. All-in-all, the 45minutes spent in the rain was fun enough.

(okay, not really, but tis heavy.)

Well, I have a lot on my mind these days not many places to put it…

I turned 24 on one of the weirdest days I’ve ever experienced. Some things just are built up so much in your mind and then when they pass, it’s like they left a void, some empty place you used to process the most horrific of possibilities, I guess. And then when it passes and everything was just fine and life continued on unabated, it’s a strange and surreal experience.

Suddenly I was sick of California, could focus on anything again, needed to get back to work, missed my car… that kind of crap. It was like some switch was thrown and two weeks just disappeared. It’s really tough to adequately place my finger on it.

I get back and everything’s the same. Same frustrations at work, at home, in my heart.

And suddenly it’s almost July. June, where did you go? I usually enjoy the month of June. This one has been funky. Blegh.

Well, this is getting a little down, so time to double-clutch it into third gear…

I am starting a full-time position at Judson effective this Thursday (July 1st) and will be scaling back considerably from the job that has provided for me for over 5 years. The place that hired me as a silly 19 year-old and gave me the flexibility to still be in school while working, while still giving me an outlet for my tenuous love of math and algebra. It was a job uniquely suited to me and it still is strange to think about leaving. I’m still going to be around there now and then, especially since the shop is super busy through the summer.

At Judson, I’ll be doing what I’m already doing (managing the website judsonu.edu) but adding some more responsibilities and projects on top of it. For one, I’m on the planning committee for Judson’s World Leadership Forum in April where George W. Bush will be the speaker. Kind of a big deal, I’m excited. It’s also a job where I’m eager to know the ‘biz’ better and pick up some web development skills. At the shop, I was never really interested in learning too much more than what I did on a daily basis because I was not really interested in being there forever.

I hope this will also give me an opportunity to freelance for the newspaper more (part of what’s been missing the last 4 weeks).

I also finished my first graduate class (sorta, it was cross listed as an undergrad class…). Overall, I enjoyed it, even if it was kind of a joke in weeks 5-10 :(. I find that I do like writing in a journalistic style. I need more practice.

I’m actually planning on doing a few tech-related posts coming up. I love gadgets and technology and would love to start writing more formally about it. My friends are probably sick of being my knowledge-dumping-pit for my many interests.

First, up, I think will be a review of Sprint’s EVO 4G Android-based phone. I switched over from my iPhone and kind thing I’d like to write about it.

So yea, lots of words above. Well, only 775ish, according to my word counter in WordPress. But I bet it felt like more.

Oh, and php looks like a big pile of spaghetti with some semi-colons thrown in for good measure. I don’t much like spaghetti.

This post and its predecessor’s title came from the song “Never Knew” by The Rocket Summer from the album Do You Feel. And yes, it’s true. (oooooh, mysteeeeeriosssss)