Well, I quite obviously have not posted here in nearly a month. Mostly, its because I have been really busy and stressed. But fortunately in the last week or two most of that has sorted it self out. Since last I posted, it looks like I will soon be moving to full-time at the mill work shop, got officially hired at Judson University as part-time staff and am finishing up my internship for which I am of course driving a TON for. Like hundreds of miles a week. And there might be a sweet opportunity coming up, but more on that when it becomes official.

So, how am I going to wittle a month’s worth of assignments down to one post? By picking 10 images and write a little bit about each one and why I picked it. So here goes! 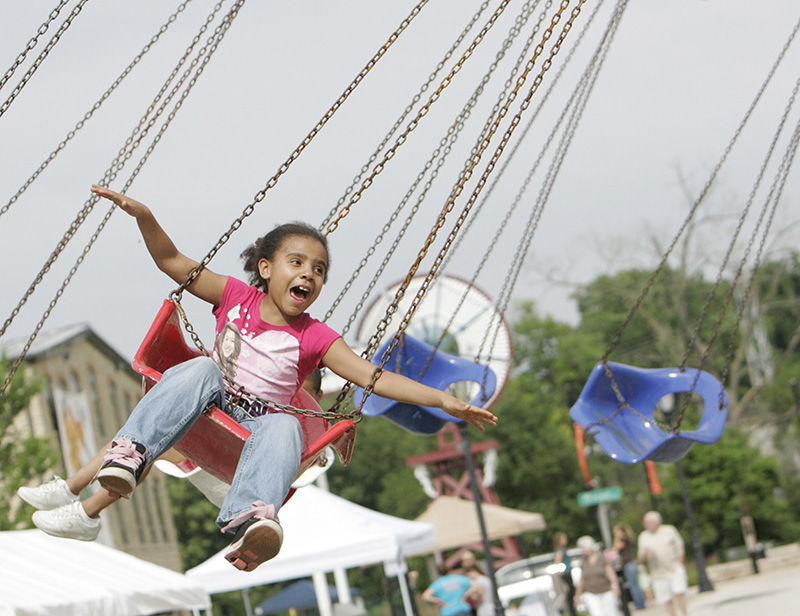 Okay, I have had to shoot a TON of festivals this summer, nearly a different one every weekend. Really, different is a loose term. They are all in different cities, sure. But they are pretty much the same. Sometimes its the same amusement company with the same carnival rides.. It makes it hard to go to each one and walk away with a different image. What makes the difference, almost entirely, is the subject. This little girl, Tykeya, just had a great expression on her face and she had her arms stretched out like she was trying to glide around in a circle. Sometimes you just get lucky, as long as you keep your eyes open. 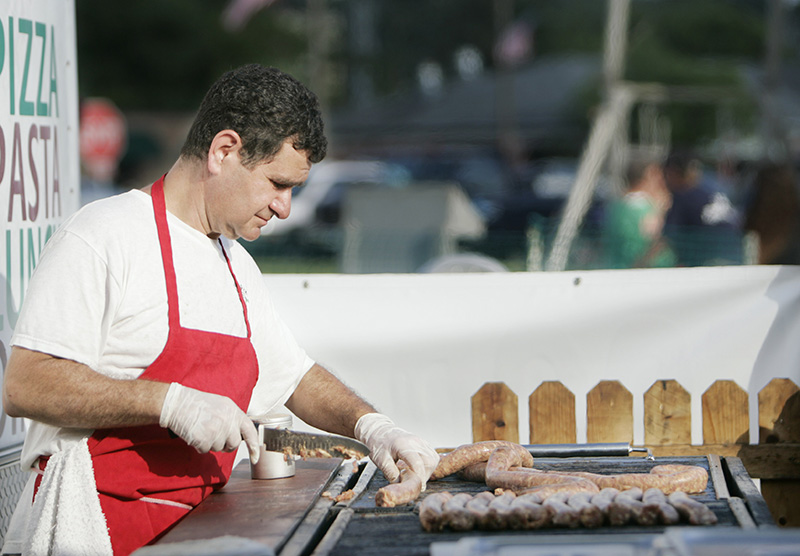 Ah, Giuseppe. As I said, many festivals are pretty much the same. I have seen Giuseppe at 4 different festivals this summer. This guy has got the coolest, thickest Italian accent I have ever heard. Great name to. This guy is just cool, hangs out at the grill cooking up these giant sausages. 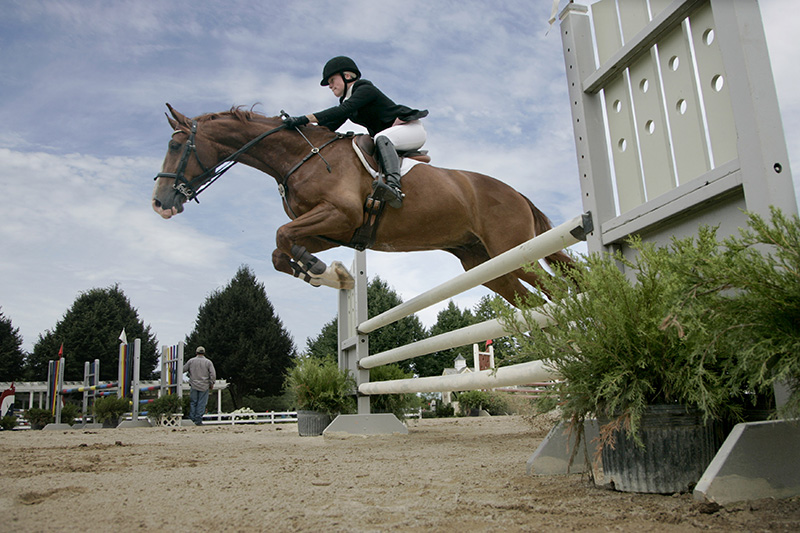 <figcaption class="wp-caption-text">Arden Wildasin from Greenwich, Connecticut clears a jump with her horse during the jumping portion of the Maui Jim Horse Trials at the Lamplight Equestrian Center in Wayne on Sunday morning. Kevin Sherman/ksherman@dailyherald.com/©Daily Herald</figcaption></figure>

This was my first time shooting anything with horses. I always thought horses were such cool animals (ask Ashley, I have commented on this many times) so I was excited to get to this assignment. It was horse jumping, so not the most exciting sport. Anyway, I went to the office to get a roster of all the jockeys so I would be able to caption without having the hardest time getting names. When I asked for one, they told me they ran out of all their rosters. Fortunately, I was able to convince the guy in charge to email me the listing right away. Here, my iPhone saved the day. Not only did I have the roster, I was able to look through it and make sure the names and numbers were right, which is not always the case.

So, with that out of the way, I got to concentrate on shooting. The courses are such that there is plenty of repetition, so I picked the places where I wanted to get shots and moved around. Eventually, I tried a wide angle shot with the camera on the ground, pre-focused. I ended up taking just over 400 images, of which I ended up with 100 solid, in focus shots. Great! I ended up liking this wide angle shot the most. Really a fun time. Oh, I did all that in only 40 minutes, which is even better! 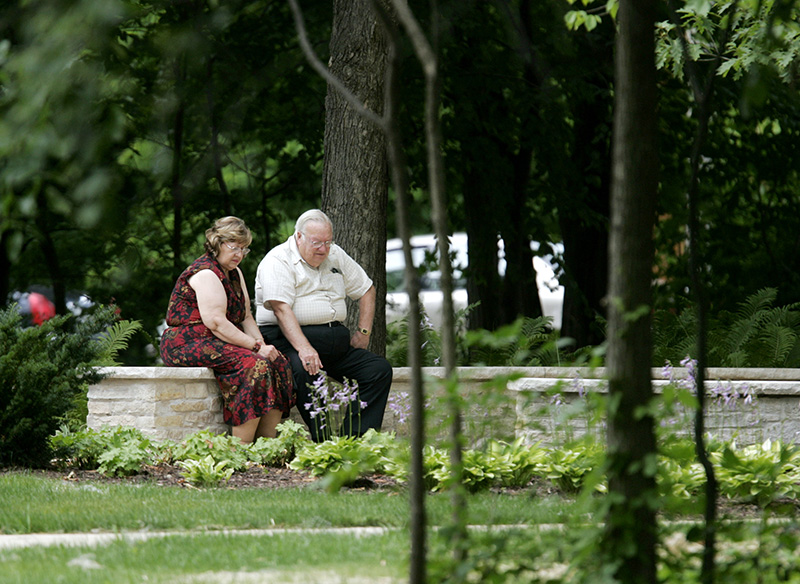 <figcaption class="wp-caption-text">Andrea Danielson, left, enjoys Geneva’s renovated Sandholm Woods Park with her husband Barry on Sunday morning. Andrea has deep roots in the area where she grew up two houses down from where the park is now and used to play on the land as a child. “This park is wonderful and I’m so happy it’s a woods. It would have been a shame to just build houses here,” she commented before heading home to Elgin where she lives now. Kevin Sherman/ksherman@dailyherald.com/©Daily Herald</figcaption></figure>

So it seems that Sundays have been my craziest days. Usually get three assignments super close together time-wise a goodly distance apart. Its a bit of a challenge figuring out how to make it work. Sometimes, its just pure dumb luck. This is one of those. I decided to get to this location early since I had the time, figured I would check it out and maybe get some editing done. It was the opening of a new park in Geneva. As I pulled up, it became pretty clear my only opportunity to make this work was right then. I jumped out of the car, grabbed my gear and decided to bring the 300mm f2.8 IS with the 1.4x Extender. The result, I was able to shoot this couple from clear across the park. A minute or two after I shot the two, they got up to leave. I had to book it across the park with two cameras and a 20lb lens to catch up with them. Not only did I manage to catch up with them, it turns out Andrea grew up right next to the park’s location. Bam. Pure, dumb luck. Oh, and a solid shot, if I may say so. 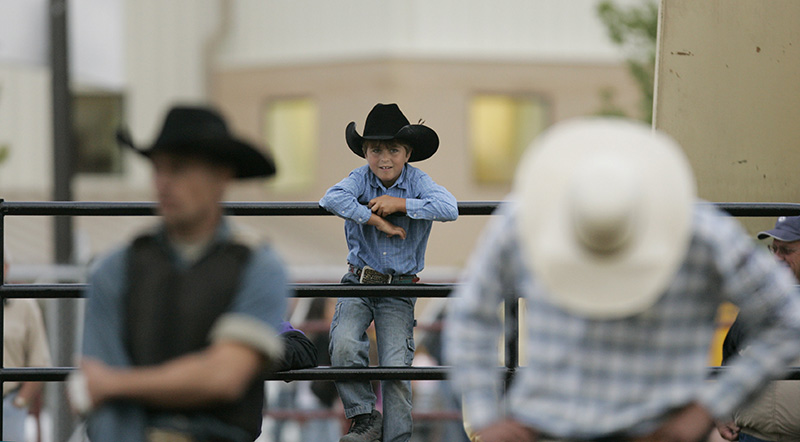 <figcaption class="wp-caption-text">Zane Pozen, 8, of Elburn watches as the night’s riders are announced before the beginning of the Championship Bull Riding competition during the Kane County Fair in St. Charles on Friday night. Kevin Sherman/ksherman@dailyherald.com/©Daily Herald</figcaption></figure>

For this night, we were having a house party, like a summer fest for the Elgin office. I really wanted to go to the party, meet some of the other reporters and such. Ah, but then I saw there was a Rodeo on the schedule for the Kane County Fair. I couldn’t pass that up! So I get there, find a place to start shooting from. They then asked all the cowboys to come out to be announced. This boy across the way (arena, maybe? Who knows, all sorts of names for the same things) and he climbed up the fence and was looking at all the guys in the arena. He had this look of excitement and reverence and I just couldn’t pass up shooting off a few frames of him. 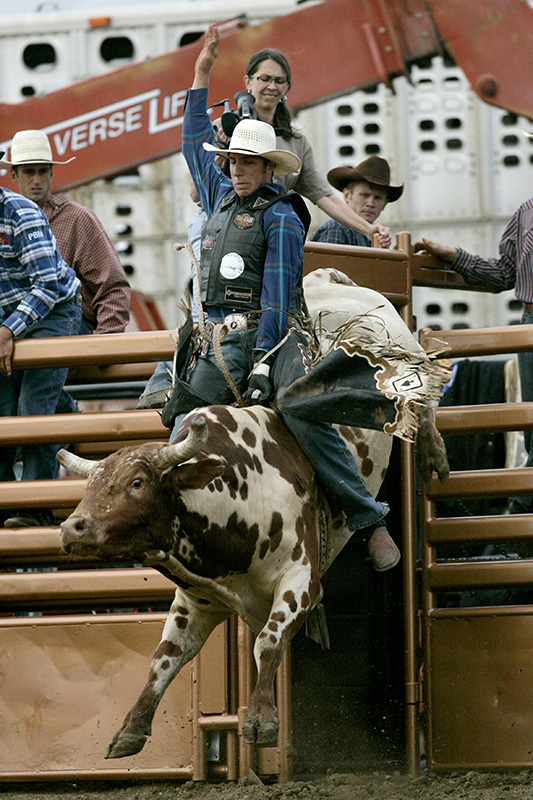 Remember I mentioned before that sometimes names, rosters or orders don’t entirely match up when the event gets started? Yeah, this was one of those. The order was all over the place, WAY off from the order the riders went in. Only a few frames ended up being useful because I couldn’t be sure who I shot. Fortunately, this was a pretty successful shot and I love the expressions on both the rider’s and the bull’s faces. 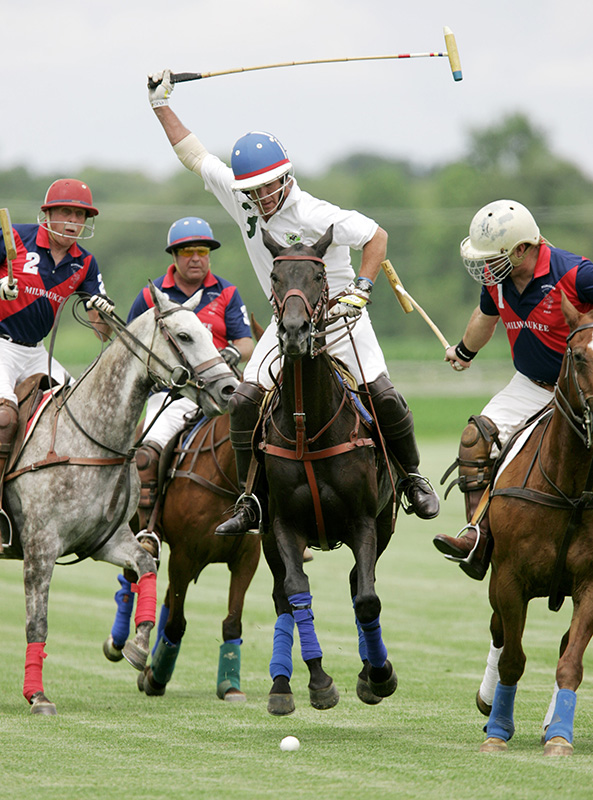 <figcaption class="wp-caption-text">Chuck Weaver (3) of the Barrington Hills polo team prepares to hit the ball surrounded by player from the Oswego team during the first period of their game during a benefit for the Oswego Cultural Arts Commission at a field in Batavia on Sunday afternoon. Kevin Sherman/ksherman@dailyherald.com/©Daily Herald</figcaption></figure>

First time shooting polo! Heard a bit about the game, though mostly I am just a fan of the shirt style. Oh, and the horses too. I only had about 30 minutes from the time I pulled in before I needed to jet on to the next assignment. That is a pretty rough proposition, to shoot a sport for the first time that you don’t know anything about. Not to mention, the action was pretty far away too. The 300mm with a 1.4x Extender was barely long enough to get the job done. This image above was literally the last on on the card. And really, its nearly perfect from a sports action standpoint. Peak action, great facial expressions (laugh at the guys face on the left!), spot-on focus, clean background, all that. Grand! 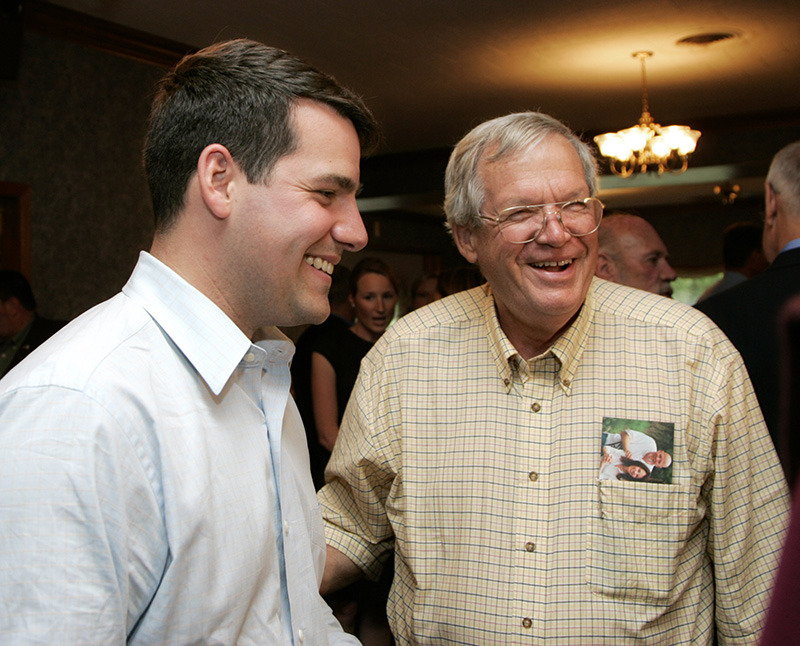 I love politics. Anyone who knows me knows I love following it. Well, not a lot of politicking happens in the summer after a major general election, but sometimes an up-and-comer launches his fund raising push for the mid-term elections. In this case, Dennis Hastert’s son, Ethan, is doing the fund raising. So I drove on down to Sandwich, IL for my first in-person politics experience (except November 4th, but I was pretty far away from anything but a TV). It was pretty boring for the most part, was really hard getting pictures of Ethan, a lot of people in a small, dimly lit room. It was also pretty rough getting Dennis and Ethan within 8 feet of each other. I was also on a time constraint, makes it all the more difficult. There was also a videographer there too from Fox News, got to talk with him a lot. Cool guy. Oh, and Dennis Hastert touched me. 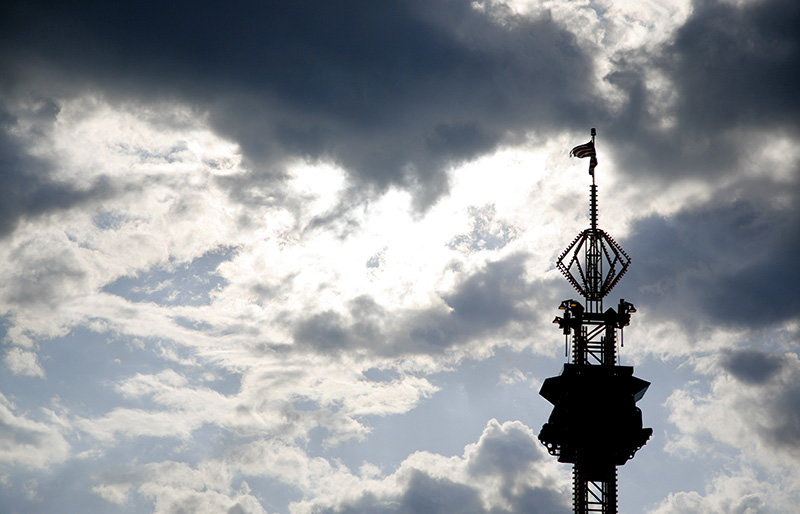 <figcaption class="wp-caption-text">Despite the threat of rain, residents from the area gather at Bruce Ream Park in Hampshire for the Coon Creek Days festival on Thursday evening. Kevin Sherman/ksherman@dailyherald.com/©Daily Herald</figcaption></figure>

On my way to this festival in Hampshire, it was pouring out. The rain didn’t break until I nearly arrived. Fortunately for the sake of the assignment, people still showed up and all went well. But I looked up and saw some really sweet clouds in the sky, with the rides making a perfect silhouette against it. And there it is! Sometimes a shot doesn’t turn out the way it looks in your head, but sometimes it does! 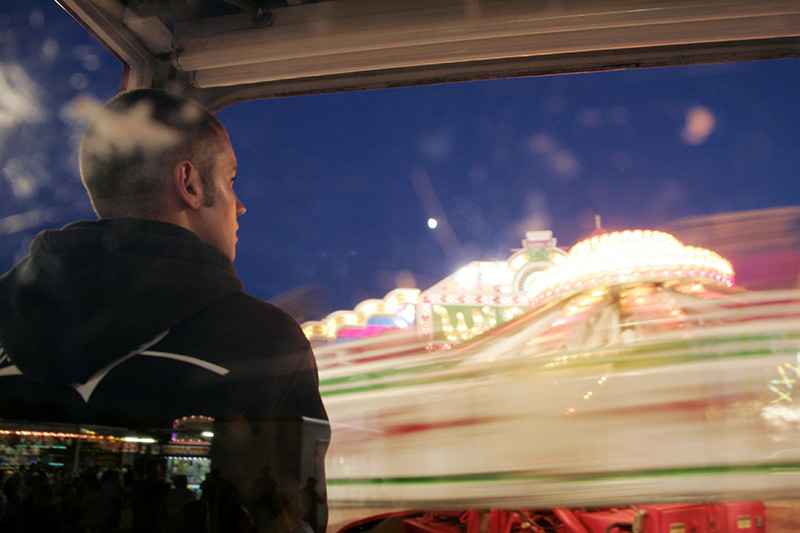 I was trying to find a different way of shooting the rides at the carnival at night. Shooting at night can sometimes be pretty hard, mostly because of the obvious lacking of light. I’m not a big fan of using a flash, unless there is no real alternative. So I was looking around and then started to think about focusing a little bit on the people running the carnival rides. Turns out, nearly all of them here were from South Africa. Crazy! Who would come to America to work carnival rides?! Anyway, the light from the ride was able to light up Benji here pretty nicely, the slow shutter speed helped to blur the ride and give it a pretty sweet feeling. Job well done, I say!

Well, I have run out of things to write about. If you have gotten this far, to the end of what has become a nearly 2,000 word post, I salute you. Please comment! I’ll owe you a beer or something, if that’s your thing.